You should spend about 20 minutes on this task.

The diagram below shows how ethanol fuel is produced from corn.

Summarise the information by selecting and reporting the main features and make comparisons where relevant.

You should write at least 150 words. 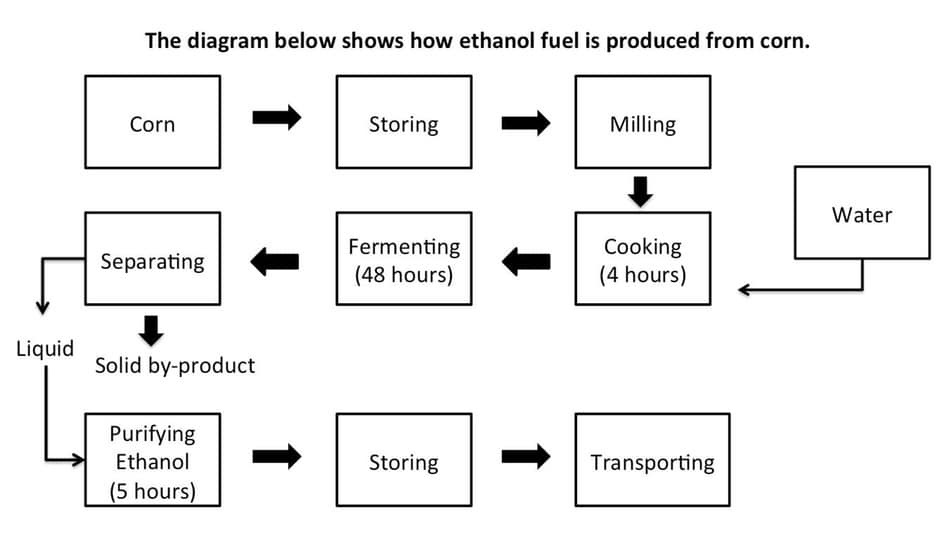 
The flowchart here outlines the process of producing ethanol fuel from corn, which consists of seven steps. First, the corn is stored and milled before it can be cooked. While in the cooking stage, the water is added. After being cooked for four hours, the corn moves to the fermentation stage and stays there for 48 hours. Following the fermenting stage, the resulting substance is separated, where the obtained liquid, which is ethanol, is sent for purification, while the solid substance is taken out as a by-product. It takes five hours to purify ethanol, after which this liquid is stored before being transported. Obtaining ethanol fuel from corn is a very extensive process that can take up to three days to be entirely completed. The most time consuming stage is the fermenting stage which takes around two days. Besides the fermentation, the cooking and purification stages also consume significant time.
E

Great job, well done. This is jut my opinion, but your answer should satisfy the descriptors for band 9.

Are you taking the exam soon?

englishgeek said:
Great job, well done. This is jut my opinion, but your answer should satisfy the descriptors for band 9.

Are you taking the exam soon?
Click to expand...